I sat there on the tree trunk bench enjoying a mild and sunny late spring day. The view is nice from under the canopy that the trees have formed around me. I see blue skies and happy little clouds, as Bob Ross would call them, moving as if they had no  particular place to go.They move slowly as if to tell the wind, “Chill mon’ friar and enjoy the day” or what ever clouds say when chilling in the breeze.I enjoy said breeze. Nice, very nice indeed.

The place I have come to relax and take some pictures of dragonfly’s is a beautiful and well keep secret. I go on call in a few hours and this is a great way to ease into the grind. Then I become aware of  a sound I have heard before but it seems strange here. That sound: The sound of combat.

The picturesque tranquility of this haven is in stark contrast to the sounds hammering down and around the hills and valley’s. The park I now sit in was  part of the military installation that the sounds of war are coming from. The flat tat-tat-tat like concussion of  heavy weapons is more felt than heard. It is followed by what I think sounds like frantic but disciplined and steady sounds of smaller arms fire.

As I said I have heard these sounds before but not in combat. I  have friends that have a house close to the range where the troops are training . So though these sounds are familiar to me, here they are quite simply surreal.

As sit there I think about my buddy, who just left for parts unknown, and a close family friend’s daugther who gets shipped out this fall. We have eaten many meals together and partook of varies cold beverages as well. Today they are a reminder of the fact that real people are engaged in protecting my privilege to be in this place right here and right now. I breath in and soak up this thought and move out to enjoy the day that has been given.

Below are some of those photos I took and I hope you enjoy them as much as I did taking them.

The bench with a view.

The view from the bench

A B&W of the path by the water way. 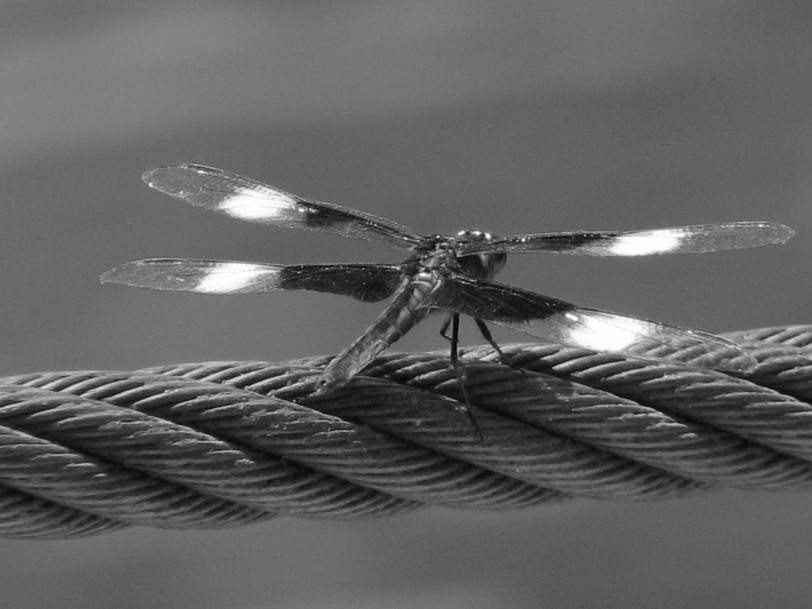 A B&W of a dragonfly that had anded on the cable by the walk way. I waited about ten minutes for this one to land long enough to snap this shot.

This is a dragonfly's version of "taxing for takeoff"

One of several small but enjoyable water falls.

These are, I believe, Yellow Anemone by the waters edge.

A dragonfly of unknown origin.

Though Dragonfly's are hard to get a straight on shot I still like this one.

Random B&W of a tree I thought was cool.

I don not know what type of flower/weed this is but it is lovely,no?